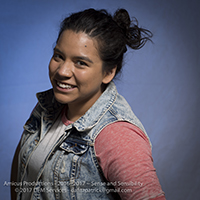 Tamara Freeman (Elinor) is incredibly proud and excited to be in her first production with Amicus Productions. Theatre credits include: Barefoot in the Park (Scarborough Players), The Woods (Humber College) and Spoon River (Humber College). She recently trained and graduated with honours from Humber College in their Acting for Film and Television program.

Jackie Mahoney (Marianne) is ecstatic to be working with Amicus for a second season, especially as one of Jane Austen’s most vivacious heroines. She’s a graduate of the University of Waterloo’s Theatre and Performance program and has been involved with theatre as an actor, director, writer and technician for almost 10 years. Past acting credits include Olivia (Shakespeare in Hollywood), Mary (Unity 1918), Rosalind (As You Like it), Maria (Twelfth Night), and Estelle (No Exit). Outside of the theatre, Jackie happily locks people up at Captive Escape Rooms Toronto.

Conor Ling (Edward) is excited to take part in his second show with Amicus this season. A graduate of the American Academy of Dramatic Arts in New York City, Conor is very excited to continue his career in his hometown Toronto. Past credits include: A Rose Upon the Blood (Red Sandcastle Theatre), The Fox on the Fairway (The Village Players), 20/20 and You’re Trying My Patience (InspiraTO Festival). New York Credits include: Dancing at Lughnasa (Mary MacArthur Theatre) and Fifth of July (Lester Martin Theatre).

Matthew Payne (Colonel Brandon) is happy to be back with Amicus Productions after playing the dashing doctor in last year’s Villette. Born and raised in Australia, previous roles include The Narrator/Fred in A Christmas Carol, Jim Farrell in Titanic, Blake Barton in Bells Are Ringing, The Voice of the Book/Mr Gatch in How to Succeed in Business without Really Trying, Mike Dillard in Working and Justin in Money and Friends.

Lindsay Bryan (Mrs. Palmer/Miss Grey) is thrilled to be making her debut with Amicus and is pleased to work with so many talented people on this production. Recent credits: The Music Man (Scarborough Music Theatre), The White Sheep of the Family (Scarborough Theatre Guild), Mary Poppins (Steppin’ Out Productions), Tribute (The Curtain Club), The Incredible Murder of Cardinal Tosca (Scarborough Players), 84, Charing Cross Road (Markham Little Theatre), Nude With Violin (East Side Players).

Jenn Keay (Mrs. Jennings) is a Toronto-based performer who has played leading roles in more than 30 musicals and plays throughout her lively, 40-year career on stage. Selected credits include: The Tempest (Miranda), The Real Inspector Hound (Lady Muldoon), Annie Get Your Gun (Annie Oakley), Carousel (Julie), Oklahoma! (Ado Annie), Company (Joanne), Once Upon A Mattress (Queen Aggravain). Last fall Jenn made her debut performance with Amicus in Les Liaisons Dangereuses as the matriarch Mme. Rosamonde. Not content to stay quiet for long, Jenn will be jumping into a spring production of Oliver! as the Widow Corney for BurlOak Theatre Group this April. Jenn has received a THEA award and has also performed as a voice over artist and radio host in her chequered career! 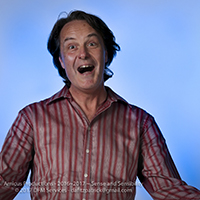 Andrew Horbatuik’s (John Dashwood/Mr. Palmer/Thomas) strikingly contrasting performances in two consecutive plays with Markham Little Theatre’s Hay Fever and Moonlight and Magnolias won him a  Special Adjudicators Thea Award for Comedy. Also he has played Benedick in Much ado about Nothing (Theatre Etobicoke), Vladamir in Waiting for Godot (Main Attraction) and Dr. Mortimer in It Runs in the Family (East Side Players). Other credits include Robert in Proof with MLT  and an appearance in the award winning P.S. Uncle Angus. Andrew is pleased to be back with Amicus.

Mandi Sunshine (Fanny) is delighted to be treading the boards again with Amicus. She is involved with several groups around the GTA, and has had several opportunities to be both on stage and behind the scenes. She has learned so much working on this production from director Maureen and she appreciates it immensely! The cast and crew has also been a lot of fun to work with. She wants to thank Brendan for being awesome with how busy she has been! The support of everyone has been incredible!

Sara Douglas (Margaret) is excited to be involved in her first show with Amicus Productions, and also her first play performance in Toronto. Some of her previous roles include Toni in Cactus Flower (ITOPA), Hortense in The Boy Friend (UWO), and Christine in Miss Julie (Trivial Theatre). She studied voice for seven years and recently enjoys taking improv and stand-up comedy classes at Second City.

Riley Anne Nelson (Lucy Steele) is originally from the East Cost and moved to Toronto three and a half years ago. Heaven knows that she is delighted to be working with Amicus again for the third year in a row. Past credits include: Goneril, King Lear (Mortar & Pestle) Quigley, Robin Hood (Amicus Productions) Ruth Condomine, Blythe Spirits (Mortar & Pestle) and Emilia, Othello (Bard in the Park).

Peta Mary Bailey (Mrs. Dashwood) is overjoyed to participate in her second Amicus production! She has also been in Villette last year, and was most recently seen this past fall in Joyful Noise (East Side Players). Many thanks to Maureen and all the lovely and extremely talented cast and crew of Sense and Sensibility for making this such a fun and exciting production. 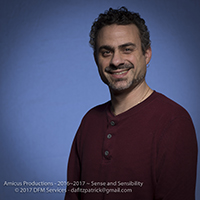 Chris Coculuzzi (Co-Producer) is an actor, director, playwright, and producer who’s been involved in community, educational and independent theatre for over twenty years. Chris became a member of Amicus Productions in 2011 and is currently serving as President for the third year in a row. This season Chris performed as Valmont in our season opener Les Liaisons Dangereuses, co-producing our current show Sense and Sensibility, and then performing again as Williamson in our spring production of Glengarry Glen Ross. When not involved in theatre, Chris is a high school teacher for the Toronto District School Board.
—–

Kathy Plamondon (Co-Producer) is pleased to make her producing debut for Amicus. Kathy has worn many hats in the theatre world. She has sat on a few boards of directors, co-produced shows, been treasurer, arranged auditions, helped run a theatre company, assistant stage managed, managed the box office, managed Front of House and even stepped on the stage on various occasions. Aside from the theatre, her biggest, most challenging and rewarding production has been her 3 kids with her co-producer and partner in crime Chris. Kathy would like to wish the cast and crew a great show. Enjoy!

Maureen Lukie (Director) has been a member of Amicus since 1978. Maureen is enjoying her trifecta with Jane Austen: having directed Emma in 2005 for Amicus and appeared as Mrs. Bennet in The Alumnae Theatre’s production of Pride and Prejudice in 2009, she now directs Sense & Sensibility with no less enjoyment. She’s also appeared on stage with Amicus (Villette, Madwoman of Chaillot) and the Toronto Irish Players (Elvis’ Toenail, No Romance).
—–

Cherie Oldenburg (SM) is grateful to Amicus Productions for the opportunity to get back into stage management after an extended furlough. Thanks also to her Shout Sisters, who allowed her a brief leave of absence to revisit her ‘other passion’.
—–
—–
—–
—– 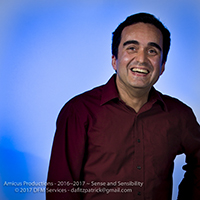 Arash (Set Design) is a set designer who has designed for Amicus for the last eight years. His other designs for Amicus include Having Hope at Home, The Voysey Inheritance, A Month in Country, Cyrano De Bergerac and Villette.  Arash is an architect and he completed his degree at the USTI, Tehran in 1996.
—–
—–
—–

Karlos Griffith (Lighting Design) had been involved in Community theatre for almost thirty years, and during that time he has worked in many positions: sound and lighting operator, stage crew, set construction, SM, ASM, sound designer and actor. But his most memorable position has been that of Lighting Designer. Karlos became a member of Amicus in 1992, and has done lighting design on many shows over the years.Karlos was very happy he was asked to design for Sense and Sensibility.
—–

Lindsay R. Forde (Costume Design) has worked for Mirvish, Stratford, Canadian Opera Company, Soulpepper and many others in the GTA and further afield as a freelance designer and costume technician. For Amicus: Les Liaisons Dangereuses (costume design/Emilie), Villette (costume design), Barefoot In The Park (set and costume design), A Chorus of Disapproval (costume design). Favourite credits: costume design for The Playboy of the Western World (George Brown Theatre School); Hairspray, The 25th Annual Putnam County Spelling Bee (TriArts Sharon Playhouse, Connecticut); 9 Parts of Desire (Seventh Stage) as co-designer of set and costumes and That Face (Canadian Stage Company/Nightwood) as apprentice designer. She currently spends her days in the non-profit fundraising world and her down-time in the world of fabrics, trims, dyes and imagination. With love to her “Mr. D.”
—– 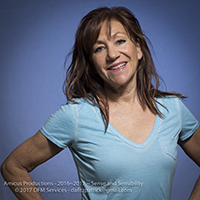 Sharon Kamiel (ASM) choreographed 9 years of productions for Crescent School and currently puppets with Teaching Awareness Through Puppetry. Recent backstage experience includes ASM for Remember, Maggy?, Dresser/ASM for The Maltese Bodkin, and ASM for both Shakespeare in Hollywood and Outside Mullingar. Sharon’s background is in Social Work, Event Planning, Choreography, and more recently, Puppetry. When not involved in theatre, Sharon works with disabled children at Holland Bloorview. After a long hiatus, Sharon is excited to be back onstage (and ASM) in Sense and Sensibility!
—– 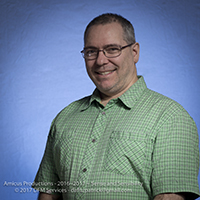 Dave Fitzpatrick (Sound Design/Photography) is delighted to return to Amicus for another season as the Photographer for the season and sound design for Sense and Sensibility. Some of David’s Amicus credits include: Having Hope at Home, Tale of the Allergist’s Wife, and Barefoot in the Park to mention a few. David can be reached at 416.993.3283 or at dafitzpatrick@gmail.com for all your photography needs (wedding, portraits, head shots, etc…).

Ted Powers (Assistant Director) is pleased to return to Amicus in a different role as Assistant Director—also known as Another Set of Eyes. He has been responsible for the Front of House displays for the past few seasons for Amicus, as well as designing the postcards for their productions of All My Sons, The Tale of The Allergist’s Wife, Prelude To A Kiss, Dr. Jekyll & Mr. Hyde, Apartment 3A, and The Voysey Inheritance. As an actor with Amicus, he has appeared in The Sisters Rosensweig, Emma, and Prelude To A Kiss.