Posted by amicusproductions on December 5, 2017 in Uncategorized
This is to inform everyone that Amicus Productions will be closing effective immediately and will not be finishing the year. Unfortunately, it would take too much effort to raise the funds necessary to continue in such a short amount of time as well as the fact that there is not enough support in terms of human resources to run the business of the company. We are happy to announce though that there is enough money to reimburse our subscribers and we will be getting in touch with them shortly to arrange payment.
We thank everyone who has been involved with Amicus over the many years and wish you the greatest success in your endeavours.
Thanks for your attention and consideration in this matter.
Chris Coculuzzi
President
Amicus Productions
Permalink
Leave a comment

Posted by amicusproductions on May 8, 2017 in Uncategorized

We would like to thank everyone who came out to see Glengarry Glen Ross. It was a tremendous success that broke attendance and revenue records! We look forward to entertaining you next season!

Posted by amicusproductions on April 21, 2017 in Uncategorized

Buy a 2017/18 Subscription at Glengarry Glen Ross, or use our mail-in Order Form, or order online here! 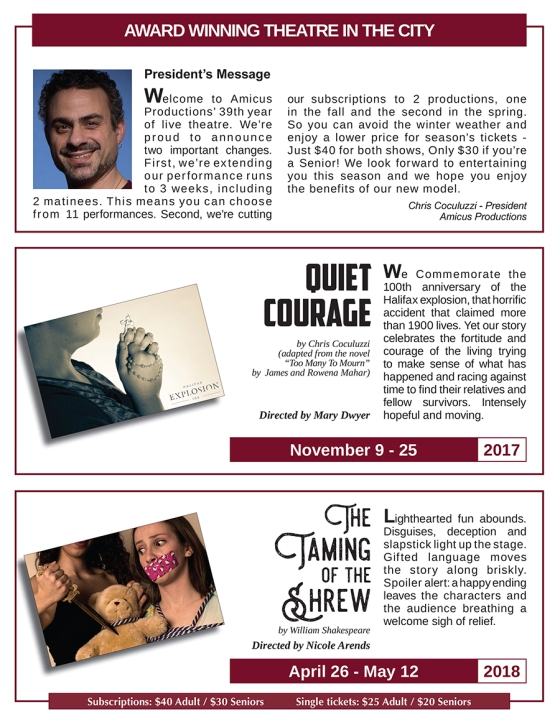 Posted by amicusproductions on March 18, 2017 in Uncategorized 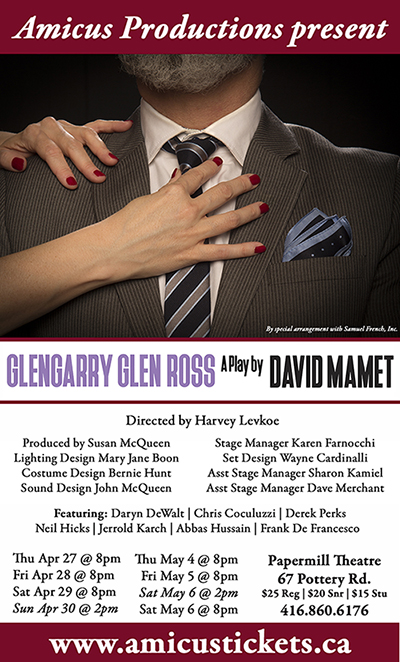 Amicus Productions closes out its 2016/17 season with the Pulitzer Prize-winning play Glengarry Glen Ross by David Mamet at The Papermill Theatre, at the Todmorden Mills historical site (67 Pottery Rd, Toronto).  Glengarry Glen Ross runs April 27th – 29th and May 4th – 6th 8pm and April 30th and May 6th at 2pm. Tickets are $25 regular, $20 seniors, and $15 students (at the door). Regular and Senior tickets may be purchased online or by phone at 416-860-6176.

In Mamet’s scalding drama, small-time, cutthroat real estate salesmen grind out a living by pushing iffy plots of land onto reluctant buyers in a never-ending scramble for their share of the American dream.  Here is Mamet at his best, writing with brutal power about the tough life of tough characters who wheedle, wheel and deal for a piece of the action – where closing a sale can mean winning a new Cadillac but losing one can mean you’re fired.

Posted by amicusproductions on February 11, 2017 in Uncategorized

Please note that because we have two performances today (2pm and 8pm) we’ve had to reclaim any outstanding online tickets so we can have them at the theatre. So tickets are available at the theatre and the Box Office opens at 1pm and 7pm respectively.

Friday Feb 10th Performance is ON!

Posted by amicusproductions on February 10, 2017 in Uncategorized

Please note that tonight’s performance (Friday, February 10th) of Sense and Sensibility is ON. However, if you feel you can’t make it because of the weather we have two performances tomorrow (Saturday, February 11th) at 2pm and 8pm and we will exchange your tickets for you.

Sense and Sensibility on Sale!

Posted by amicusproductions on January 10, 2017 in Uncategorized

Amicus Productions presents Jane Austen’s Sense and Sensibility adapted by Jessica Swale at The Papermill Theatre, at the Todmorden Mills historical site (67 Pottery Rd, Toronto).  Sense and Sensibility runs February 2nd -4th and 9th-11th at 8pm and February 5th and 11that 2pm. Tickets are $25 regular, $20 seniors, and $15 students. Tickets may be purchased online at www.amicustickets.ca  or by phone at 416-860-6176.

As Classicism and Romanticism meet head-on at the turn of the eighteenth century we enjoy an intimate look at the triumphs and tribulations of two seemingly lovelorn sisters: one duty-bound, the other longing to live a full life. Yet for both the reality is dependency: protecting their well-being by submitting to the wishes of their future benefactors. Despite the entreaties of men who may or may not be honourable, these women move forward and fate eventually smiles on them. In other words, this is every bit a Jane Austen romance.

Posted by amicusproductions on June 16, 2016 in Uncategorized

Thanks to everyone who came out to our General Auditions and Call-backs. The response was overwhelming and so was the talent. We are pleased to announce our acting company and creative teams for 2016/17. Please note that names with an asterisk (*) denote first time performing with Amicus.

Posted by amicusproductions on April 3, 2016 in Uncategorized

Amicus Productions is pleased to announce our 2016-17 Season! 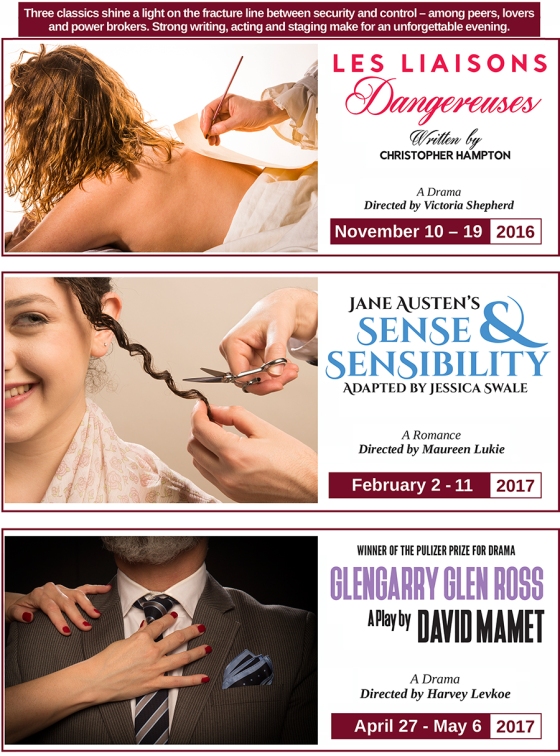